It’s official: Dani and Adam are back for the holidays.

I mentioned previously I was hoping to call it “Baby, It’s Cold Outside”–I love that song and I think the cheeky tone fits the characters. But the title was already in use with the publisher, so that left me on the hunt for another title…

A quirk of mine is that I like to pick song titles for my books, and series often are linked by a musician. Stirling Falls? Wild Horses, Sympathy for the Devil, Gimme Shelter…The Rolling Stones, obviously.

I adore the Stones song “Winter” but I thought the title needed a little more, so this novella is officiall called Wild Horses: Cold, Cold Winter. 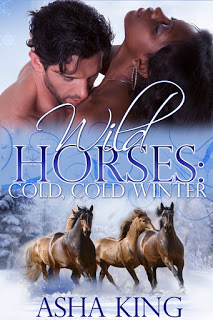 Six months after the events of Wild Horses, blogger Danyiah Jackson happily lives in the country, loving—and often shocking—her broodtastic horse wrangler boyfriend, Adam Cooper.
But her surprise Christmas present for him, done as a prank for her blog and to spring some life-changing news, incites an argument months in the making, bringing the insecurities and vulnerabilities of the pair to the forefront. Adam wants more than he fears she’s willing to give, and Dani has a secret of her own that she fears will tear everything apart.
Is a happily-ever-after really possible for an opposites-attract romance?

Keep warm until then! Here are some tunes to get you in the mood:

If you want to catch up, you’ll find Wild Horses on Amazon, Nook, All Romance eBooks, and Phaze–all ebook formats and in print.

Here it is for Nook readers!

Some exciting new things brewing and I hope to have news for you next week. Thanks for reading!

Though it was time consuming and difficult to write, I admit I really, really loved Wild Horses. I had loads of fun with that one–Danyiah was so much fun to write, and YUM, Adam! Readers have commented that they were hoping for a more solid HEA–I do lean toward slightly more ambiguous endings, I suppose–and that they really missed the couple when WH was over. Though there will be glimpses of them in Sympathy for the Devil and Gimme Shelter, I thought their story was done.

I’m glad to announce I was wrong.

I have a holiday novella in progress with them, hopefully you’ll see it next month! It’ll bridge the gap between Wild Horses and Sympathy, and possibly tie up a few things while presenting a few more challenges…

Baby, It’s Cold Outside
Blogger Danyiah Jackson happily lives in the country,
loving—and often shocking—her broodtastic horse wrangler boyfriend, Adam
Cooper. But her surprise Christmas present for him, done as a prank for her
blog, incites an argument six months in the making, bringing the insecurities
and vulnerabilities of the pair to the forefront. Adam wants more than he fears
she’s willing to give, and Dani has a secret that threatens to tear them apart
for good.

Details to come as I know them!

A huge huge HUGE thank you to those of you who picked up Somebody to Love this week and left a couple of reviews–it means so, so much to me. You rock!

Here’s an excerpt from the novella. 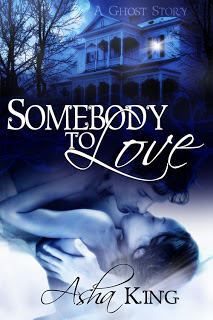 The empty house at the end of Landsdowne Lane is
supposedly haunted.
Among the alleged ghosts is a couple who died
young and, legend has it, they possess the living and draw true love to the
house for a night of passion before dawn comes.
Marie and James are about to find out if it’s
true.

Buy on Amazon (Kindle)
Buy on Smashwords (all formats)
Other stores coming soon!

I have a question I’m pondering.

My history as a writer is this: I had three releases earlier in the year in close succession: March, May, and June. I had things contracted, scheduled, and planned for the next few months. Instead, it wasn’t until the end of October that something else came out.

Why? I explained my self-imposed break already, and the reality is that aside from 3K on Still in Love with You, until I wrote Somebody to Love this month I didn’t write a single word. Not a one. Even my blog was silent.

Somebody to Love is a self release. It was advertised here on my blog (which feeds to Amazon and GoodReads), on Twitter, and on my Facebook page, and that’s it–and these were all places where I said that the piracy of Wild Horses hit me hard enough that I had to take an extended break from writing and I wasn’t sure if I’d even write Sympathy for the Devil. So when this story was requested at a piracy forum the very same day it released, I know it had to have been someone who actually follows me in some capacity. I know you are or probably will read this in some capacity.

So please explain this to me, “tennie75”: Do you not want me to write?

Did you want to read Somebody to Love so badly that you thought the cost of another four months going by without me writing justified it?

As I said, this book was a self-release. This means I pay for editing. I pay for stock photos. I pay for the software that allowed me to cleanly convert it into various formats. All of that money came out of pocket. I am paid on a per-purchase basis and I’m not even remotely close to making that money back–more people have now illegally downloaded it than purchased it. I spent the past several days working all hours on this story, setting aside family time, setting aside OTHER paid work, in the hopes of delivering a story I was really proud of to readers and that I’d make my money back (and then some), justifying the time I spent on it. I thought, well, if it’s a self-release and only advertised here, surely it’ll be awhile before people steal it. After all, it’s just my fans paying attention here, right?

Nothing is free. The books you steal have a cost, and that is going to come in one of two ways: 1. Lower quality from the authors you take from as they attempt to make up for lost income by producing a lot, or 2. no books at all from the authors who can’t justify writing any longer.

I was seriously hoping to get at least two more releases out by the end of the year, thinking that extra income would help out with bills at home, because right now I’m trying to choose between things like keeping my house warm for the winter with the rising electricity costs and paying for medication for my eldest, as we can’t afford both.

Please, “tennie75”, if the book isn’t worth the $2.99 it’s available for, is it worth driving me to quit writing altogether?