You are here: Home / Uncategorized / What I’m Working On: I WHO HAVE NOTHING

I’m actually working on a few things, but here’s a taste of what I’m hoping to bring you in the new year…

I Who Have Nothing 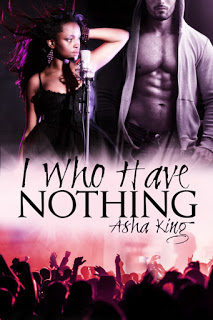 Darren Dallas watched his father die
at the hands of his corrupt business partner five years ago. He left law school,
gave up the life he was building, and descended into an underworld where drugs
and prostitution run rampant, struggling to survive as he seeks to bring his
father’s killer to justice. He’s had many close calls, but none as bad as when
he’s almost made by his target after following him into a nightclub and stands
face to face with a loaded gun wielded by a murderer.

A woman with a
secret…

Contemporary blues singer Ella Lockwood enjoys the local
club scene, with loyal fans following her show to show but able to fly under the
radar and enjoy her privacy. She never expected to see high school sweetheart
Darren Dallas again—not after she abruptly broke his heart several years ago,
and certainly not now in the club where she performs while a notorious thug
threatens to kill him.

Ella rescues her old flame with a lie, one that
throws them together and tangles her in the dangerous web he now lives in. Worse
still, the sparks are still there between them, and their rising desire is a
fire that threatens to consume them if Darren’s quest—and Ella’s past—doesn’t
kill them first.

This is to be a standalone contemporary romantic suspense. I LOVE working in this genre, actually–I like straight contemporary, but I found when I was writing the end of WILD HORSES that I really get a lot of joy out of that element of danger. Besides this, I’m looking forward to planning SYMPATHY FOR THE DEVIL for that very reason (yay, serial killer!)

Darren stepped outside and raised his hood; the rain had picked up in
just the short time he’d been in the club, going from a mist to a drizzle, and from
there he anticipated a downpour. And he focused on that, on the feel of rain
hitting his face and pelting the top of his hood, because he was too numb to
think.
That was Helen Lockwood—Ella, Montanez had called her. It had
been years—seven or so, at least—since he’d seen her last but behind the long
hair, dangling earrings, and makeup, it was the same girl he knew as a teen.
Or thought he knew.
Heels clacked on the cement behind him in a rush and a moment later, six
feet outside the club, he felt her hand wrap around his arm.
“Oh,” she said, her volume loud as she caught up, “honey, you didn’t
have to go looking for a taxi. We can walk.”
She tightened her grip, nearly jerking him to a halt. He slowed then
came to a stop with a heavy sigh, staring straight ahead instead of at her.
“What the hell are you doing?” she whispered as she leaned close. “Do
you know who you were talking to?”
“None of your business.” Sure, he’d tried to move in too soon—tried to
grab an opportunity and been caught. Montanez might’ve recognized him
eventually. Marco most definitely was a problem.
But he wasn’t going to admit that to her.
“Listen to me…” She shifted to his side and grasped his jacket lapels,
drawing him closer. “Two weeks ago, Andrews beat a man into unconsciousness
outside the Blue Horizon after it closed. And the witnesses mysteriously forgot
everything they saw. You don’t mess—”
He stiffened and tried to pull back, but she held him tight.
“Damn it, Darren, look.” Her eyes flickered to the side pointedly
and she raised one of her brows.
Darren focused on his peripheral vision and saw the figure she
indicated: Marco Andrews stood outside the club, watching their conversation.
Her face was scant inches below his now, close enough he could smell her
spicy perfume. “If they think I was lying, they’ll question why I was
lying.”
He nearly snapped a comment about how he didn’t ask her to get
involved, but as he stared down at her, he swallowed back the words.
Helen—Ella—gazed up at him from under the hood of her black
pleather jacket. Her expressive brown eyes were wide, almost hopeful, and
definitely concerned. She hadn’t changed much, still with thick black lashes that
looked almost unreal, large lips he remembered, with a pang, how good it felt
to kiss.
For a moment the numbness cracked and with it everything pierced him
again—the fear, the guilt, and now the near-painful love he’d felt for her so
long ago. He shoved it back down again but memory remained, like staring into a
bright light and seeing lingering spots when plunged into darkness again.
The sight of her tore at him and his first instinct was to take off and
disappear into the night of rain and strangers around them. Staying, even if
only briefly, would lead to words—conversations he didn’t want to get into,
long-held arguments he didn’t want to have. Helen Lockwood had once broken his
heart and no matter the intervening years or a changed name, that’s who she
would always be to him.
But for now, he owed her thanks, and wouldn’t put her at further risk.
The charade could go on a short while longer.
Darren raised his arm and slipped it over her shoulder, drawing her to
him, and they walked through the thickening downpour.