The cats are back!

The fourth Cats & Conjure story is on its way in March.

To those who kindly didn’t send me hatemail for the ending of Stray Cat Strut: THANK YOU. I was tremendously proud of the ending of that story, as sad as it was, and I didn’t want anyone to wait another year for the next one. As I’ve said before, sales are always low with these ones, so I have to squeeze them in between other releases. There are two final books coming, hopefully by the end of the year, and then there’ll be a print collection of the final volume.

Here are the details! 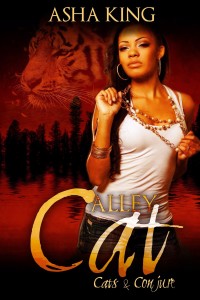 Adelaide Deveraux has at last come into her powers, but her gifts have come with a price: she has lost the love of her life. Now surrounded by allies but still utterly alone, she’s seeking to build a new Sanctuary and provide shelter for those who need it, even though none of it will heal her broken heart.

Tiger-shifter Erik Wells was willing to sacrifice everything to save Addie from the psychopathic sorcerer after her, including his life. But despite paying the ultimate price and annihilating their enemy once and for all, he still isn’t at peace. Some greater power is seeking to resurrect Erik, willing to move heaven and hell to see him breathe again. Whether that power is good or evil, he doesn’t know, and he’s running out of time as something’s hunting him in the underworld, seeking to destroy his very soul.