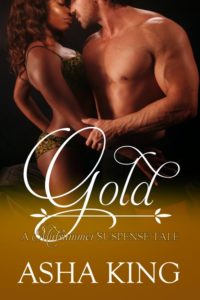 This was originally a tougher one to plot. Where previous fairy tale retellings–Cinderella, Sleeping Beauty, Snow White, Beauty and the Beast–had clear plot arcs and villains to base my stories on, when I had the idea to do Goldilocks and the Three Bears one, I ran into a bit of a block.

Really, any Goldilocks story would have to be a wrong-bed-trope kind, so the romance was going to be easy. But for the rest, the suspense aspect, I asked, What if Goldilocks was running and hiding from someone? What was her life before finding the bears’ cabin?

I looked then at other fairy tales and settled on Rumpelstiltskin and the miller’s daughter who has to spin straw into gold.

The result was my new story Gold about the “baby bear” of a family who’s always been in trouble with the law and hacker girl on the run who stumbles across his family’s lodge.

Here’s the blurb and pre-order info, and below the cut I’ll paste the Once Upon a Time (aka prologue) opening. The excerpt is unedited, so please forgive any typos and errors.

Usually I like to have the next book up for pre-order when one releases, however I’m probably going to take a break to research my next projects, and I’m uncertain what I’ll be working on next. After Gold, I don’t have any firm release dates decided upon. I’m thinking of working on Gimme Shelter next. I also have Cats & Conjure #5 and Midsummer #6 on my list.

END_OF_DOCUMENT_TOKEN_TO_BE_REPLACED

One of my dearest writer friends is m/m author Darien Cox. We started at the same publisher years ago, and I was hooked as a fangirl when I read his first book. He just came out with a sexy, intriguing new sci-fi romance novel, which I devoured in record time and couldn’t help asking some questions. And I’ve got answers for readers dying for more!

Q: You usually write contemporary romance. What made you go with sci-fi this time?
A: I’ve always been a closet nerd, read a lot of books about various conspiracies etc. just for fun. So after I put out Victim of Love last year I got a little blocked, and ultimately a friend asked me…well, what do you love? I was like…um, cheeseburgers? Oh, and creepy otherworldly stuff, yeah, that’s it! I was hesitant to go there at first, but my editor, Skyla Dawn Cameron, reminded me that art is risk, and that I could still use my own voice and a contemporary setting while adding the weird. So I said screw it, let’s have some fun. I think it still very much feels like a Darien Cox book, it’s still a pretty modern romance, just with some oogedy boogedy weaved into the plot. The best part is it worked – I’m unblocked and already partway into a MM non- creepy contemp novel I’m gonna put out before the next Village book, so it’s a good mix for me, alternating between the two.

Q: All the side-characters have rich, detailed lives even though they’re not the focus–do you already know who will get their own book?
A: Ultimately I want them all to get their own books, but I have decided on a certain character for the next one. It’s going to be fun to get deeper into all their backstories while rocking their little worlds and getting them naked.

Q: Without giving any spoilers, do you have more mysteries to explore with the scifi angle after explaining some of it in this book?
A: And it’s so hard not to talk about spoilers! But yes, definitely. The great part about what’s lurking around the village is that it’s still such an unknown despite what’s been revealed. Even though I’ve used some existing concepts, I really wanted to get across that when it comes to this stuff, bottom line is NOBODY FUCKING KNOWS, so my goal is to keep it surprising. While writing this book, I tried to really open myself up and let the story tell itself, so to speak, and was happy the details that emerged managed to surprise even me, so there’s gonna be some crazy stuff coming down the pipe for our village crew.

Q: How did you go about constructing the village itself to be its own character?
A: Well first, I’m happy you see it that way! The village, while ultimately becoming a very real and unique place to me, started out as a combination of places I’ve spent time, places that are colorful, a little off-beat, and give you a sense of self-containment, like their own little world. There’s a bit of Provincetown in there, a little Hull, Massachusetts, and a dash of Burlington, Vermont. Places that have that kind of island feel where if you go on the off-season you’ll see the real locals and feel the pulse of the place and what’s brimming beneath the surface. So I basically put all that in a blender and then used the characters and the story to mutate it into its own animal. As far as the New York State setting, I’ve had some awesome experiences in the mountains up there, and it’s definitely a place that pops up a lot in the non-fiction realm, in terms of ‘I had a weird experience in this place’, so I took that and used a speculative eye to expand upon it.

Q: What made you decide to add cameos of Ben and Peter from Seducing Professor Coyle? It was nice to see them again.
A: It was a combination of circumstance and laziness! At the start, Rudy needed help with his computer, and I thought, ‘If only Ben LeClair was here’. Then I thought…oh wait, he can be. BECAUSE I AM GOD HERE!

Q: Can you tell us what the non-creepy contemporary romance you’re working on is about?
A: It’s a forbidden fruit story, which is pretty much my favorite theme, and it’s going to be very, very, nasty. In a good way.

Q: When can we expect The Village Book Two?
A: Shouldn’t be too long! The ball-ache of writing the first one was setting the scene and creating the village and the characters. Now that they’re in place, I’ll bang the second one out fast, already got most of it outlined. So get ready to whip out that #smutordie hashtag!

Thank you for visiting, Darien! 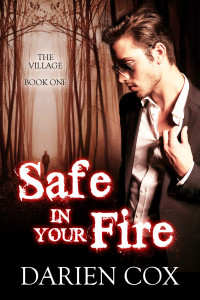 Welcome to The Village – A new gay romance series with a sci-fi twist from best selling author Darien Cox.

When asked to locate and interview an off-the-grid former child star for a magazine feature, novice journalist Rudy Sansone thinks he’s getting yet another demeaning assignment from his boss. But finding ‘Baby James’ Waterman proves to be a personal and professional challenge, as the elusive, hostile, and surprisingly sexy James is nothing that Rudy expected. But Rudy’s scrappy motivation to get the story at all costs plunges him into the mountain community of Singing Bear Village, where he senses strange and frightening secrets simmering beneath the surface. But what’s simmering between Rudy and his reluctant interview subject is something more carnal and heated, and his desire to be consumed by it clouds his judgement when warning bells urge him to flee the village and never look back.

Buy on Amazon, ARe, and Nook.