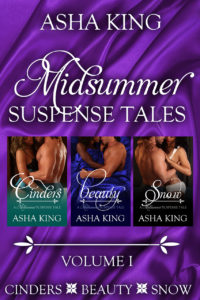 CINDERS – Things haven’t been the same since the death of Gina Cassidy’s father. It thrust her under the rule of her cruel stepmother and turned the family bakery into something unrecognizable. But now Gina’s an adult, not a frightened child, and she has a plan: figure out what secrets her stepmother has been hiding and how it relates to her father’s death once and for all.

BEAUTY – Bryar Rosings was raised in the country by her aunts, isolated from the world at large. Her birth family remains a mystery to her, secrets kept hidden away to prevent a dangerous foe from locating her. A chance encounter with troubled former pop star Sawyer and a viral video kicks into motion a decades’ old grudge that threatens not only their love but their lives.

SNOW – Stoic and efficient, personal security expert Michael O’Hara is cautious in all things—both work and women—and has built a reputation in the private sector as the top of his field. But though he thinks he’s seen it all, nothing has prepared him for keeping murder witness Liliana White safe.